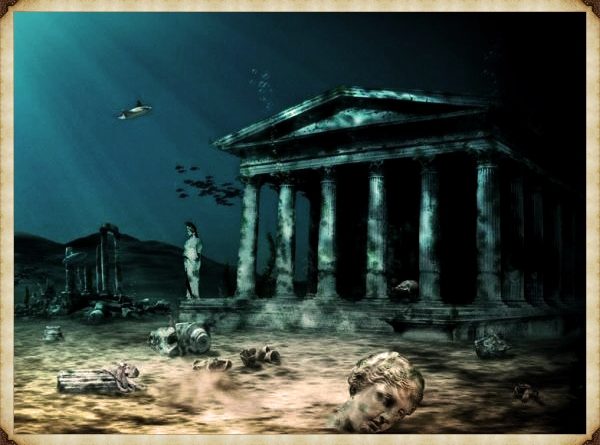 “The sea, once it casts its spell, holds one in its net of wonder forever” – Jacques Yves Cousteau

After the last ice age, the ‘great melt’ flooded the landscape of Britain for over ten thousand years.  This flooding started a chain reaction, and consequently, the sea level slowly increased, and vast areas of land were lost, including a landmass known as ‘Doggerland’.

Throughout the 19th Century, oyster dredgers working the shallow waters off the northeast coast of England recorded frequent finds of animal bones caught up in their nets.  These discoveries became a regular occurrence as the fishing technology increased and the trawlers later date and in deeper waters of the North Sea found traces of civilisation and a lost continent.  Sadly, the location and accuracy are rarely recorded with any degree of accuracy; this material appeared to come from many areas within the North Sea.

One area where the most significant number of finds is the ‘Dogger bank’, which lies just 90km – 110km (60-70 miles) from the coast of the British Isles.  This shoal (a shoal, sandbar, sandbank or gravel bar is a somewhat linear landform within or extending into a body of water, typically composed of sand, silt or small pebbles.)  rises about 45m (150 ft) above the North Seabed, to the north, it plunges into deeper water and forms a subterranean plateau covering 17,600 sq. km.  (6,800 miles) with a maximum dimension being 260km (160 miles) from North to South and 95 km (60 miles) from East to West.  Over time, the number of finds reduced as the same area was dredged day after day, and any artefacts sitting on the surface would have been scooped up and either returned as a curiosity or, in a majority of the time, just thrown back in a different location.

Even so, items such as; bear, wolf, hyena, bison, woolly rhino, mammoth, beaver, walrus, elk, deer and most importantly, a horse has been collected.  This precious collection of findings gives us a fantastic insight into what Doggerland looked like, the environment that supported these animals and the climate of this unique area of the world.

It would be impossible to talk about Doggerland and its environment without understanding if there was a written history of a land that flooded thousands of years ago, and this comes in the works of the ancient Greek philosopher Plato.

Over the years, Atlantis has grown to be both a legend and the source of many science fictions; this is neither correct nor helpful in tracing the history of humanity, as it moves the debate from scientific observation to fantasy and the degrading of the most critical time of our history.

Plato is credible as he is not a ‘storyteller’ like some other historical writers.  He is fundamentally a philosopher whose writings are still studied, some 2,000 years after his death at the most famous and prestigious universities worldwide.  This man is not prone to fantasy or exaggeration; therefore, his writings must be accepted as valid evidence that once in the distant past, a great ancient civilisation did exist and that they changed the course of humanity in ways that I believe we do not fully understand to date.

Consequently, we need to look at the probability that Plato’s ‘Atlantis’ is a genuine reference to this land, as it is the oldest written source and may give us clues of how this civilisation lived and traded.  Fortunately for us, Plato gave some detail about this civilisation, such as how they lived and what they believed, allowing us to compare what we know; from known landscape and archaeological finds and look for more inaccessible areas of investigation the texts might reveal.

Plato’s most famous line from ‘Timaeus’, a dialogue between Critias and Socrates, in which ‘Critias’ tells a story he learned through his family, about the Greek statesman ‘Solon’, whilst he was studying with the most scholarly of Egyptian priests during a visit to Sais in Egypt in about 590 BCE.  The priests claimed to have access to secret records about a lost civilisation called ‘Atlantis’, which only they were allowed to read, for it was written on the pillars within their most sacred temple.  Now Sais was one of the oldest cities in Egypt’s ‘old kingdom ‘, and the city’s patron goddess was ‘Neith’, whose cult is attested as early as the 1st Dynasty, ca. 3100- 3050 BCE.

The Greeks, such as Herodotus, Plato and Diodorus Siculus, identified Athena and postulated a primordial link to Athens.  Diodorus recounts that Athena built Sais ‘before’ the ‘deluge’ (flooding) that supposedly destroyed Athens and Atlantis.  While all Greek cities were destroyed during that cataclysm, the Egyptian cities, including Sais survived.  As we can see from this connection, the deluge has incredible importance to ancient civilisations, clearly indicating that any prehistoric culture that wanted to ‘stay alive’ would possibly build boats, not for some, but everyone.  Sadly, the city of Sais has been recently destroyed by farmers who used the house and temple mud bricks as free fertiliser for the fields – to this date, the temple and its writings have never been found.

The most famous line from Plato’s dialogue is “in front of the mouth which you Greeks say ‘the pillars of Hercules’ there lay an island which is much larger than Libya and Asia together” translated by W.R.M. Lamb 1925 or “in front of the straits which are by you called the pillars of Hercules; the island was bigger than Libya and Asia together” B. Jowett 1871.

This single sentence has caused no end to the debate about the location of Atlantis.  Some suggest that ‘the pillars’ can refer to water flows, thus allowing the speculation (which is current) that Atlantis is a Greek Island.  Others suggest (including myself) that the ‘pillars of Hercules’ are the Mediterranean’s mouth between Morocco and Spain.  Again, this is a case of translation and interpretation; the word ‘mouth’ is sometimes called ‘strait’; in other quotations, Plato refers to the Mediterranean Sea as “within the straits of Hercules.”

According to some Roman sources, while on his way to the island of ‘Erytheia’ Hercules had to cross the mountain that was once Atlas (the Atlas Mountains are in Northern Africa overlooking the Mediterranean); instead of climbing the great mountain, Hercules used his superhuman strength to smash through it.  As a result, he connected the Atlantic Ocean to the Mediterranean Sea and formed the Straits of Gibraltar.  However, the best evidence is in the name itself ‘Atlantis’ for Herodotus (an ancient Greek historian,  484 BCE – c. 425 BCE) in a time before Plato’s writings call the sea outside the Pillars of Hercules the ‘Atlantis Sea’ (Cyrus, 557-530 BCE: Book 1).  Moreover, even today, we call it the Atlantic Ocean, and in history, C’s and S’s are commonly transposed.

We are consequently, left with a clear understanding that Atlantis was in the Atlantic Ocean, but then comes the following problem with this description “the island was bigger than Libya and Asia together” this is where most Atlantis claims fall flat.  Libya was well-known in Plato’s time as a big country as it bordered the Mediterranean, but the reference to Asia cannot be the Asia we know as it was unknown to the old world and the Greeks; therefore, the Asia that Plato was referring to, is now called Asia Minor.

Asia Minor (from Greek: Μικρ σία, Mikrá Asía, small Asia) is a geographical location at the westernmost protrusion of Asia, also called Anatolia, and corresponds to the western two-thirds of the Asian part of Turkey.  It is a peninsula bounded by the Black Sea to the North, Georgia to the northeast, the Armenian Highland to the east, Mesopotamia to the south-east, the Mediterranean Sea to the south, and the Aegean Sea to the west.’

The size of this ‘island’ is consequently a significant problem for historians to date, as the only two island possibilities are the Caribbean in America or a continent that was once in the middle of the Atlantic Ocean that has disappeared without a trace.   Well, the Caribbean islands are far too small, and the trek across the middle of the Atlantic Ocean Atlantis Ocean (NEP) without a landmass to guide the ships, eleven thousand years ago, would have been quite daunting with ‘Bronze Age technology’ as Plato suggests.

Some researchers have speculated an island in the middle of the Atlantic between America and Europe, but to date, there has been the only evidence of small islands and nothing to the scale of either Libya or Asia Minor (let alone both!) under the ocean that has sunk in the last 10,000 years according to Plato’s text.

This is why the search has failed, to date, and all various ‘silly’ hypotheses based on the Mediterranean make news headlines.  However, if we look again at this passage and the exact wording of Atlantis, we find something most researchers have overlooked in the translation, and it’s the word ‘island’, the original Greek word is ‘nesos’ which can mean either island or peninsula.

If we are looking for a ‘Peninsula’ (which is a piece of land bordered by water on three sides but connected to the mainland) outside the Mediterranean, then there are only two possibilities – Africa or Europe.  These are both outside the Pillars of Hercules and can be easily navigated by sticking to the shorelines.  The African continent has shown no signs of any peninsula on its Atlantic side that has disappeared in the past 10,000 years – but Europe has!

If we look at a map of Europe at the end of the Ice Age, we notice that the water levels were about 160m lower than today, so much lower than different coastlines were added to Spain and France.  However, when we look at the British Isles, we notice Britain has wholly vanished and replaced a new landmass.  This ‘peninsula of Europe’ protrudes into the Atlantic Ocean, for the English Channel, Irish Sea and the North Sea as we know it today has been replaced by a single landmass.  Moreover, the waters to the west of Ireland and the North West from Scotland have also been reclaimed from the sea.

This peninsula includes Britain, Norway, Sweden and Finland, Denmark, and the Baltic Sea, creating a continent about the same size as Libya and Asia Minor, which correlates to Plato’s writings.

We know from our history that the rising sea waters over the last 10,000 years caused flooding that created the island nation we know today.  But, do the writings contain any other information that will confirm this peninsula is the landmass Critias is talking about? Plato adds, “yonder (beyond the pillars of Hercules) is a real Ocean, and the land surrounding it may most rightly be called, in the fullest and truest sense, a continent” in this sentence, the ‘island’ is turned into a ‘continent’ so this proves that the translation of ‘nesos’ is a peninsula, not island.  So in today’s terms, we are looking at a landmass that incorporates the British Isles, Scandinavia and the Northern European countries of France, Germany, Holland, Belgium, Poland, Netherlands, Denmark, Lithuania, Latvia, Estonia and the Baltic, North and Irish seas, that were at the time one great landmass, which I call the North European Peninsula (NEP). 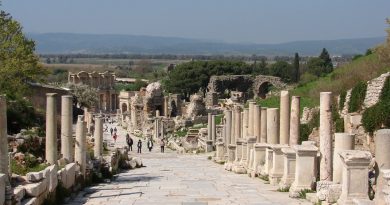 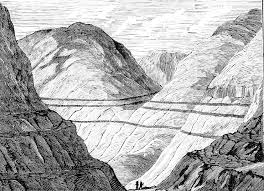 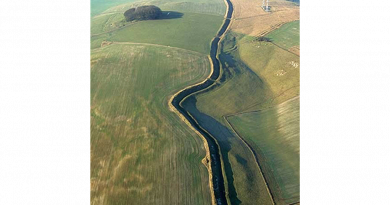