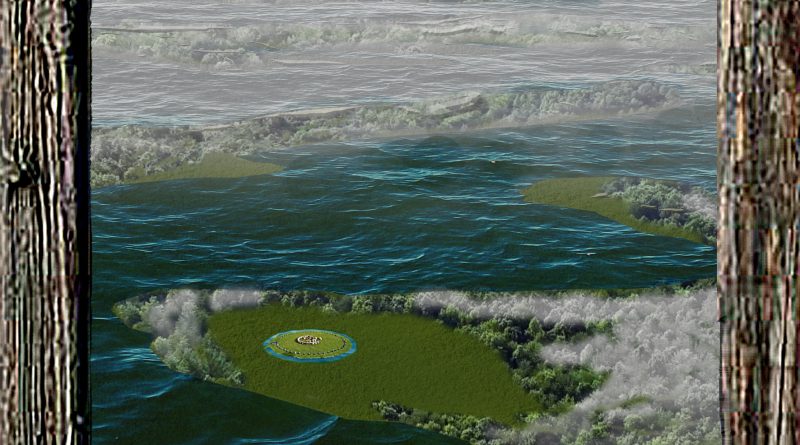 The most sensational and controversial book in the history of archaeology has now been published, which will not only re-write the events of prehistoric Britain but moreover, the World. Our history books tell us that 12,000 years ago, the last Ice Age finally melted away to reveal the Britain we know today.

Britain had been under TWO MILES of ice and the seas that now surround us were frozen solid, leaving a huge mass of enormous weight pushing down on our tiny island. This mass had compressed the land so much that the surface sat some half a mile below the current sea level.

SO WHAT REALLY HAPPENED AFTER THE ICE HAD MELTED?

In this book Robert John Langdon explores the probability that when the ice melted, rather than leaving the land mass we now know as Britain it did, in fact, leave a collection of smaller islands and peninsulas caused by river flooding as the ground water table had risen by just 30m higher than today, creating an aquatic tropical landscape. Quite remarkably, this book shows that Stone Age Man survived the Ice Age and the great flood to go on to develop into a great maritime Civilisation – to date, this unknown society which lived in boats on the waterways and used them to construction our magnificent stone monuments, such as Stonehenge and Avebury that have lasted nearly 10,000 years.

Revisiting accepted Archaeological, Geological and Topological findings Langdon has been able to write an astonishing hypothesis with compelling new proven evidence that not only re-writes our view of prehistoric Britain, but consequently, our view of the ancient world!

This Lost Civilisation not only had the advanced engineering skills to build and sail boats, but moreover, was able to travel throughout Europe including the Mediterranean to trade goods. Astonishingly, their knowledge enabled them to undertake sophisticated medical procedures, such as dentistry, limb removal and even brain surgery, giving us a remarkable insight into the complexity and sophistication of their society.

This book proves beyond doubt that Stone Age Men were NOT the fur clad hunter/gatherers living in mud huts as archaeologist would have you believe, but were instead members of a Great Lost Civilisation which carbon dating has proven to be responsible for the building of Stonehenge some 5,000 years earlier than currently believed.Have you ever wondered what civilisation brought the Bluestones 200 miles from Wales to Stonehenge?

Section One – The Geological Evidence

In the first book of this trilogy ‘The Post-Glacial Flooding Hypothesis’ we looked at the new mathematical models that allowed us to calculate the amount of water that was released during and after the Last Glacial Maximum just over ten thousand years ago.

These models showed us that a minimum of 8.42 quadrillion tonnes of water was released on the UK at the end of the last ice age.  This is equivalent of 98425.2 inches of rain falling on every square Inch of Britain’s landmass or the same as: One Inch of rain steadily falling every day for the next 270 years

So how would that affect the landscape?

The worst known flooding in British history occurred in 1947 when just six inches of rain (149mm) fell on up to 12″ of snow (so a maximum of 15″ of rain if melted) over a three-month period. The flooding, which inundated nearly all the main rivers in the South, Midlands, and the Northeast of England, was notable for its origins, geographical extent, and duration. Impacting on thirty out of the forty English counties over a two-week period, when around 700,000 acres of land became flooded. Tens of thousands of people were temporarily displaced from their homes, and thousands of acres of crops were lost and this was just 15 of the estimated equivalent 98425.2 inches of water that was shed on the British landscape after the last Ice Age.

This section looks at the existing archaeological evidence within prehistoric sites in Britain to see if there is further affirmation to prove my hypothesis.  Surprisingly, the most undeniable evidence comes from past archaeological excavations. Primary source materials through excavation and findings are always open to reinterpretation, especially in both archaeology and geology, as in most cases, there is a little ‘other’ evidence to support the original theories.  However, geology is now changing as it attempts to incorporate the new technique of Optical Dating methods (as we saw in the previous chapter) in the same way as carbon dating revolutionised archaeology.  But yet even with a method of confirming dates, the samples used can also be called into question and the results even more so, as objects are never fixed in time or location.

Now we have established that there is compelling evidence of higher prehistoric rivers, as shown on the superficial sediment geological maps of Britain, we must now look to see if we can find more realistic dates for the sites that sit on the edges of these waterways.  The most effective way in establishing how these raised groundwater levels affected our ancestors is to look at the landscape features constructed by this civilisation, to see if we have evidence of this groundwater within their constructions.

We have concentrated on the River Avon region, as it is the only area in Britain that provides sufficient detail to be able to test my hypothesis. Nevertheless, I have also found similar evidence throughout Britain, perhaps less detailed but nonetheless firm evidence, which will also be in part included as discussion points.

The most compelling evidence for my hypothesis – that prehistoric monuments were built around a flooded environment – can be seen within a detailed topological inspection of most ancient sites.  The landscape layout of these monuments show that their entrances and mooring areas oriented to the Mesolithic shorelines seen by the contours of their surroundings.

However, like jigsaw puzzles, once you have assembled the end pieces and the borders, the picture becomes much easier to understand, and this is the case with our most ancient monuments.   The most effective method we have found for locating this evidence, is to look at the profiles of these sites, and then their position relative to their topology.  By doing so, ghosts of the original landscape can be found in the contours that have changed little in the last 10,000 years.

Our research has shown that Stonehenge was not the only monument in this area of the landscape to be affected by the rise in groundwater tables. Other sites in the general vicinity were similarly affected, all of which indicates that these sites were socially connected by the waterways that once flowed through the area.

Consequently, in this section we shall concentrate in detail on the archaeological evidence in the form of ditches and monuments, to allow us to get the best picture on how this civilisation organised itself and the advanced engineering skills they possessed that has left the ‘experts’ bewildered at these achievements and function, as they resort to unscientific theories and religious beliefs, in an abortive attempt to explain the obvious.

Section One: THE GEOLOGICAL EVIDENCE